One of the magic that a volcano as Mt Etna offers is its caves. Thanks to the lava that digs underground canals – or creates a solid layer around as it flows, remaining liquid inside – there are different types of grottos and caves scattered around the volcano. Come find them out with us! Though with more than 40 caves it is impossible to visit them all. But we will surely take you to discover the most famous ones.

The Most Beautiful Caves of Etna

The caves of Mt Etna are dozens both around and on the volcano. The most fascinating are seven and among these three are the most beautiful to see: Grotta del Gelo (the Ice Cave), Grotta dei Lamponi (Raspberry Cave) and Grotta Tre Livelli (the Three-Levels Cave). Grotta del Gelo is located at an altitude of 2040 meters, close to the “southernmost glacier in Europe”, along Sciare del Follone on the northern side of Etna. When a gap in the ice starts opening, then in spring or summer time, you can drop into this  30-meters deep hole and walk the entire length of 125 meters. 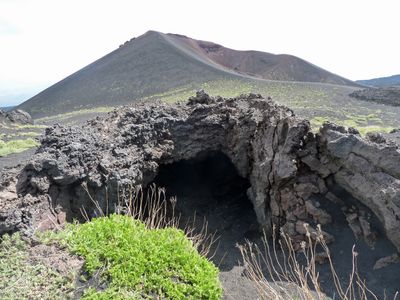 Grotta dei Lamponi is located in the Lava dei Dammusi area,  northern side of the volcano. You walk for 6 km before finding it, a hole in the ground that will introduce you to a magnificent underground room where light creates magical atmospheres.

Grotta Tre Livelli is located on the southern side, in the Casa del Vescovo area (1630 meters). You can arrive by car, in fact the entrance is right next to the provincial road that goes up to the Rifugio Sapienza. The cave is formed by three overlapping and connected galleries and with its total 1150 meters it is the longest ever.

The Other Lava Caves

The three we have mentioned are the most famous and popular caves, but there are many other grottos to be discovered and at least four others are on the body of the volcano too. The cave of Aci, despite the name reminding Acireale and Aci Castello is located in Randazzo, 2050 meters high and extends along 115 meters between communicating tunnels. Grotto of the Saint, in the municipality of Adrano, seems to have hosted St Nicholas Polito! It develops for 800 meters along a series of overlapping and not always communicating tunnels that have preserved fragments of ancient ceramics for centuries.

At Etna Sud, near Zafferana, we find the Grotto of Cassone which, at an altitude of 1400 meters, extends for 277 meters of length under the rocks of Piano del Vescovo. The Cave of Arches(Biancavilla) is formed by three caves of different levels and contains eternal snow inside. It is easy to walk in and in the past it was one of the “niviere”, that is to say the place where to take the snow that was then used to make ice cream in the summer!
WARNING! Almost all the caves can be visited only with the accompaniment of expert local guides. Do not make trips on your own  because with the volcanoes it is never wise to mess around.