Home Blog The sausage cooked on the tile and Etna mushrooms

One of the scents of autumn in Sicily is that of the bundles of wood, burning in the fields. And that of roasted vegetables, to which richer dishes are often added, such as game meat or pork. Mount Etna territory, in the first rains, is filled with delicacies that obviously become autumn recipes. And if you prepare them with typical products you will get a unique, intense taste, different from anything else you have tasted before. We propose, in this case, the recipe of the “sausage ndo canale” (that is, cooked in the terracotta tiles) together with Etna mushrooms.

Artfully processed and minced-by- hand pork meat, made on the famous “strain”, is a typical delicacy of Etna. But in particular of the town of Linguaglossa. Its strength lies in the simplicity, in the freshness of the product that is seasoned with little things – salt, pepper, fennel seeds – but dosed with extreme skill. This sausage is then cooked strictly on the grill. Alternatively, it can be cooked in the oven. And a further alternative to the oven is to bake it on a tile made incandescent by the open fire, and covered in turn with another tile.

How to prepare sausage “ndo canale” with mushrooms

To cook the sausage “ndo canale”, terracotta tiles must be possibly elongated, like those of the ancient nineteenth-century houses. Four tiles are fine for the purpose. Two of these will be placed on fire, in order to overheat them. Once hot, the sausage knots are put inside, seasoned with rosemary and, if you want, also with garlic, on the outside. When the sausage is well coloured, cover the tiles with the other two tiles, and turn off the heat, leaving the “oven-like” cooking to complete.

The mushrooms that will accompany the meat can be prepared in many different ways. Some prefer them in the form of a salad, cut raw and dressed with oil, parsley, salt and lemon. Others cook them, perhaps roasted on a skewer, or in the oven. Or together with sausages, in the hot tiles. What matters is that they are the right mushrooms, and that they are safe. Everyone can go mushroom picking on Etna in autumn. But before eating them, have them checked by expert connoisseurs of the subject, so to avoid poisoning.

The mushrooms of Etna

Etna is rich in woods, especially on the north-east side. After the autumn rains there are many 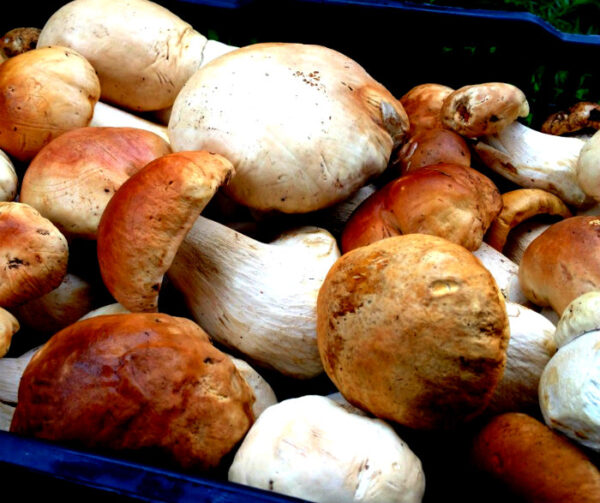 mushrooms that make their appearance in the undergrowth and many enthusiasts who run to pick them. Obviously there are toxic species, which must be known and avoided. But many other types of mushrooms are edible and also very common.

On Etna you can find delicious mushrooms here known as “funci i Cerza”,”Lardari”, the oval “funci d’ovu”, the “cricchi i jaddu” or the pinerolo mushrooms (“funci i Zappinu”). If you are unsure on the subject, still have the experts check your collection, before putting everything on the table. You can also buy Etna mushrooms in the shops of the foothills, making sure that the producers are local.

How to eat sausages “ndo canale”

Taste the sausage so cooked and with the mushroom side dish directly on the plate, with all the additions you want: potatoes, peppers, onion! Alternatively, you can enjoy it between two slices of good home-made bread, softened with oil. For accompaniment, you can’t go wrong: the good red Etna Wine, which is found everywhere in the area. Or, if you prefer a “German” touch, accompany your meal with beer. But let it be a good Sicilian craft beer … many are produced in the Etna area. Just take your information and you will find them.