Home Blog The tradition of beekeeping in Zafferana Etnea

When you go up to admire the most beautiful volcano in the world, Mount Etna, you will almost always pass by the streets and squares of Zafferana Etnea. This small town on the east side of the volcano, in fact, is the main access route to the most famous paths and tourist destinations of Etna. If your guide is thoroughly prepared, he/she will almost certainly suggest you a breakfast or lunch right there, in Zafferana, on the way out or back. Because it is impossible to pass through the town without tasting the delicious local honey, the result of a not very ancient but certainly long-standing tradition.

If you ask around the inhabitants and the various honey companies of Zafferana, you will surely hear many similar stories. In fact, they all boast of having “that ancestor” who first started the tradition of beekeeping in the town. Sometimes he will be called Giuseppe, others Sebastiano, sometimes Mario … names and places change but one thing remains unchanged: the period, that is, the 1920s.

In fact, it seems that the custom of raising bees started in Zafferana Etnea around 1920-1922, when “a young local farmer, tired of working in the fields, decided to produce honey for a living”. Most likely this “young farmer” really existed, or he is just the symbol of a generation – that of the 1920s – that decided to bring something new to the territory. What is certain is that – since then – Zafferana Etnea has been called “the city of honey”.

About Zafferana as a town

The tradition of breeding bees may have existed before, but it was not a trademark of an entire community. After all, Zafferana Etnea as a town was born only at the end of the 19th century. Previously, only a convent and several summer villas of noble families from Catania stood here. The town started to grow thanks to mountain tourism, which developed between the 19 and 20 century.

Today Zafferana is a delightful, clean, panoramic town. It has a main square dominated by the beautiful church of Our Lady of Providence, with the two bell towers that frame the craters of Etna and their explosions. It has a panoramic balcony overlooking the coast, a public park with attractions (a pond, a tennis court and an amphitheater). It still has the remains of the monastery around which the whole town was born. But above all it is the starting point of various nature trails that lead to the discovery of centuries-old trees, woods and lava flows.

Along the streets of the town there are several honey shops and companies; therefore the choice is varied. It doesn’t matter which one you choose, because the quality will always be high and the honey flavour unique and unforgettable. 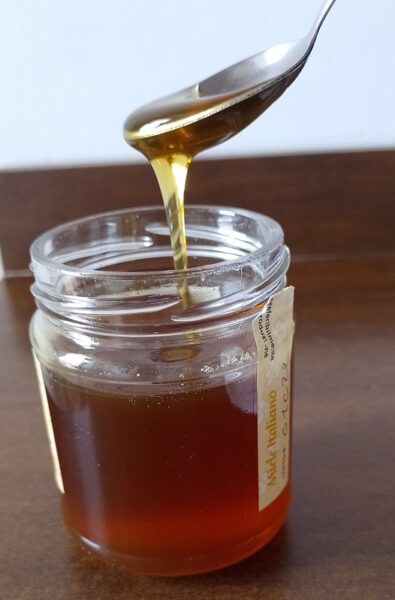 The varieties of honey that will enchant you

The most famous honey in Sicily is that of orange blossom, which is obtained thanks to the citrus flowers much loved by bees. In addition to the traditional “many-flowers mix” that can never be missing, it is worth tasting the chestnut-flower honey, as chestnut is a very common tree on the eastern side of Etna. Zafferana is surrounded by chestnut woods and the local beekeepers know how to refine this product starting from the nectar of the flowers that bees collect in the surrounding area. To complete it all, there is also a variety of flavoured honey (with strawberries, apples) that tourists love to taste especially at local festivals.

Honey and the mountain

Honey is a product that not only satisfies but recharges the energy. Just a little taste is really enough to feel immediately fit. Not everyone considers it as an escort when they go for long walks or mountain climbs, yet it is very important.

In addition to the inevitable chocolate, salty snacks and water, carrying a bottle of honey or biscuits and made with honey with you is a smart move to never suffer from fatigue. And if you go to climb Mount Etna, through its steep lava flows, to witness one of its spectacular eruptions – sometimes even in the heart of cold nights – make sure you have honey with you. Recover your lost energy with a “delicious” help. Much better if it was a very product of the volcano’s land. It will also be an original souvenir for an experience to remember forever.