A continuously changing landscape, Mount Etna has erased many places in time and others -that are still visible today- maybe tomorrow won’t be there anymore. The lava eruptions and the ashes change the top territory all the time and make these places a mix of geography, history and myth.

We shall lead you to the top of the volcano, to see the places of incredible tales and legends. Maybe you will see views and elements that won’t exist anymore, in a few years, becoming myth themselves. Here we will tell you about what used to be the Torre del Filosofo (Philosopher’s Tower) and Laghetto (Small Lake) crater.

The Philosopher’s Tower, where Empedocles lived

The first explorers who had the courage to climb to the top of Mount Etna, anciently, found just at the base of the then unique Central Crater  ruins of indefinable age but certainly man-made. They hypothesized, then, that they were the ruins of the shelter built by the Greek philosopher Empedocles, who wanted to study the volcano and died – it is said – after jumping into its crater.

Whether this is true or not, it was never given to know. But those ruins were called “the house of the philosopher” and several centuries later, when they decided to protect them with the construction of a sort of concrete tower, they became Torre del Filosofo. Refuge, museum, monument … Torre del Filosofo was this and more. In the Middle Ages it was already mentioned in some chronicles. In 1800s the volcanologists began to use it as a base for their studies. In particular it was opened for many years to British scientists  from which also the name “house of the Englishmen”.

In 1960 the town of Nicolosi -that owns this part of territory-  decided to build the tower that gave it the modern name we all know. But Torre del Filosofo paid hard for its existence at an altitude of 2,900 meters, too close to the mouth of the volcano. Between 1971 and 2003, several eruptions first threatened, then surrounded and almost completely buried the turret. The last one in particular, between 2002 and 2003, covered it completely and today it is possible to identify it only from the rusty antenna that emerges from the sciara – the cold lava flow . 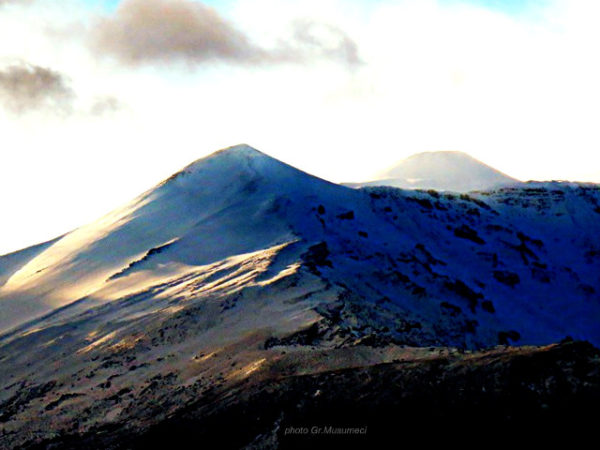 Pian del Lago   (the Plain of the Lake) is between the Montagnola – an ancient 18th century crater – and the modern craters. It runs close to the so called “Barbagallo Twin Cones” and its name is due to the small valley once existing there. This valley was filled with water, during the thaw season, so it became a wonderful small lake. The lake was visible only for two or three months, then it would evaporate.

Between 19th and 26th July, 2001,  during the huge eruption that caused  soil fractures and new vents all over the south-eastern side of Etna, a new cone started to grow right in the middle of the small valley of the lake. After explosions and slag fallout, in less than one month, it became a real crater. It was, and is still, called Laghetto Crater, in memory of the small lake. In 2002 it was also named after the bishop founder of Opus Dei Movement: Monsignor Escrivà.

The Laghetto Escrivà Crater is located at about 2580 meters, next to the much higher and steeper Montagnola. It can be reached with a short walk from the cable station towards the summit craters. Being lower and less tiring to climb than the Montagnola, it is an excellent tourist destination.

Today you can admire a large iron cross, placed on the ground in memory of Monsignor Escrivà, and you can enjoy the view of the Valle del Bove, while the guide tells of the myth of that beautiful lake today lying … under your feet .