In the early morning hours of 1 April 2012, there was a new episode of lava fountaining from the “new South-East Crater” (New CSE) of Mount Etna, this year now in its fifth times. Also this time it came to high lava fountains, several milesfrom a high column
Steam , ash,lava and small lava stones . 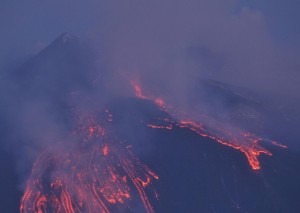 Starting at 23:30 local time of 31 March, there was a progressive increase in frequency and intensity of Strombolian explosions, both in the amplitude of tremor.The lava is then passed over the crater rim, reaching the base of the cone after about 30 minutes, where it was divided into two parallel streams.At about 00.00 clock, the activity has been to strombolian fountains of lava and ashof an eruption column forms several kilometers high over the summit of the volcano. Meanwhile, the lava has expanded into several parallel streams that flowed into the valley “Valle del Bove.” The eruptive cloud has been blown by the windtowards the south-east, with strong impacts of ash and small lavastones on the Etna – Villages 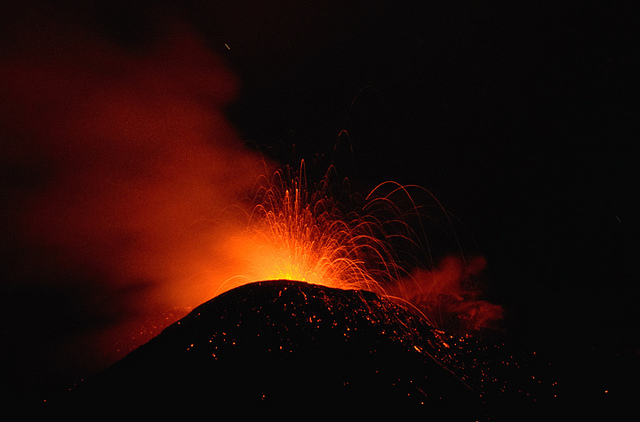 Zafferana and Monterosso, as well as the small town further down Giarre and Acireale made a lot of disability.The activity with lava fountains and strong emission of ash continued without significant change to about 01:30 clock, from here the strength of the volcanic tremor began to sink. The eruptive activity ended at 2:40 clock.