The third eruption with lava fountains from the “NEW SOUTH-EAST CRATER” this year – the 21st In the current eruptive phase, which began in January 2011, 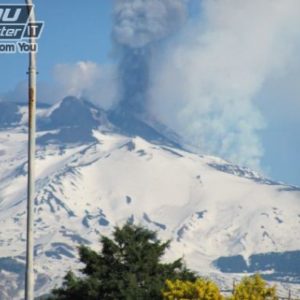 occurred on the morning of 4 March 2012. Unlike the previous episode, this event was violently explosive and produced small pyroclastic flows and lahars (mud avalanches), which resulted from the explosive interaction between lava and on the ground located snow.

After the outbreak of 8 February 2012 was the Etna for a week in a state of rest, on the morning of the 16th February started small ash emissions from the “New South East Crater” and lasted 18 days.

plötzlichen to increase, while the strombolian activity in the crater also showed a rapid increase in frequency and intensity of explosions. The eruption began at 07:00 clock and ended after 4 hours.